Is it OK to ask general questions about fashion and furniture items found by archaeologists?

Without the historic background, these questions look like questions about clothing, jewellery, furniture, tools, hardware etc

As long as you document your research in the question, you'll probably be OK. Let me illustrate with an example.

If it's OK, I'll use your question What's the definition of "Splashware"?

into Google, and browse the first page of the results, I can see that:

If that is all you need, then the question is "a request for trivia", as they say round here, and so is going to be off-topic. If you want more than that, the you should include all of the above in your question and explain why it isn't a sufficient answer.

Another way to think about it is that the bar to be cleared here should be Mark's "preliminary research test".

It can also be helpful here if you familiarise yourself with some useful Google search techniques.

For your example questions

"The body of a fibula is known as either the bow or the plate, depending on the basic form. A bow is generally long and narrow, and often arched. A plate is flat and wide."

I suspect that the first question might just be on-topic here. While it is trivial for me to answer, it might not be for someone who doesn't know to search for "fibula" in the context of a brooch.

I think the second might be considered off-topic, but then we are back to the question of do people know what a "fibula" is in this context.

I would certainly argue that the third question was on-topic. The specific use of the terms in archaeology - and by extension in historical articles and journals - differs from common modern usage. Provided that it made explicit reference to an historical or archaeological context (e.g. the UK Portable Antiquities Scheme), I think that this would be on-topic here.

To clarify my answer to the third question above (since the comments below seem to indicate some confusion) consider the example of an escutcheon plate on a lock: 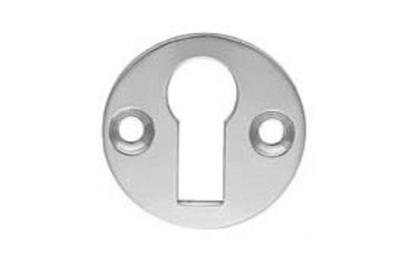 The function of an escutcheon plate is obvious - it protects the wood around a keyhole from damage when keys are repeatedly entered and removed from the keyhole. They are particularly associated with warded locks and examples have been found in contexts from Ancient Rome and Ancient China. In its simplest form it is just a disk or rectangle of metal with a hole of appropriate size and shape cut into it. Most of us would consider this to be a "furniture fitting".

But I suspect that most of us have also seen much more elaborate escutcheon plates, for example: 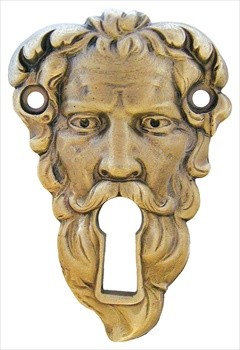 This still performs the function of an escutcheon plate, but is also now a decorative item. Is it now a "furniture fitting", or a "furniture mount"? Where should we draw the line?

There is no hard-and-fast rule.

Modern furniture makers are somewhat indiscriminate in their use of the terms (which, I suspect, was the root of the problem when you asked that question on DIY:SE).

I say "NO," to "general" questions about "fashion and furniture items found by archaeologists." We have an "off topic" reason that disqualifies questions on "social sciences other than history unless they involve history in some way." The other stricture is against "trivia or basic historical facts."

That said, I would say "YES" to specific questions regarding the historical significance of a particular fashion or furniture item. Having meaningful "context" is everything when dealing with history.

Basically, I would like to see the site discourage "ID" or "fishing" questions, while allowing conceptual questions regarding the same items. So a question like "What is the difference between a furniture fitting and a furniture mount? would be off topic. This might even be better for an English language site because it is a "terminology" question. On the other hand, a question like "why did American/English/European families prefer furniture fittings over furniture mounts in the Xth century?"would have historical significance and be on topic.

41
Why did my question get a downvote?

13
Is the “How things work” analogy valid?
5
Where do we place the line between Skeptics.SE and History.SE?
2
What can we do about our Persian “human resource?”
2
Should questions like this be closed?
3
What to do with closed question about phobias
8
How should we deal with answers reading the question a bit differently than OP intended (frame challenge)?
6
Are questions about data sources acceptable here?